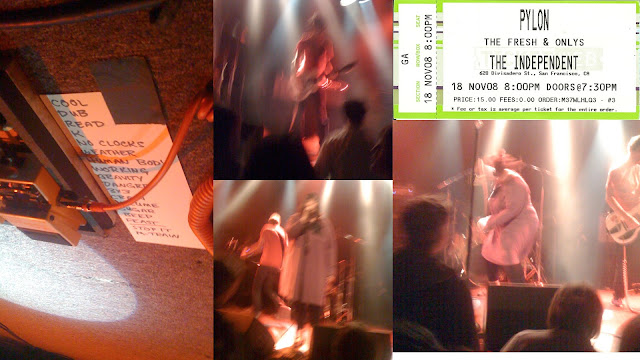 Notes from when this was shared on a certain Bittorrent site back in 2008.

Caught them briefly during Part Time Punks, only taped the encore track (M-Train), as I decided to go see Savage Republic instead, figuring that they were playing in SF a couple days later so I could catch them then.  [2021 note:  Sadly, guitarist Randy Bewley would tragically pass away from a heart attack in January 2009, this was their penultimate show playing with him.  In retrospect, I should have skipped SR and seen them instead]

This time, remembered to use the bass cut on my Edirol.  Works wonders.  [2021 note: did it?  I can improve on this now, but am presenting this as shared back in 2008]

Also included a scan of my ticket, a couple of photos of the setlist...note that while 3x3 and Beep were was listed, they weren't played  [2021 note: actually, only 3x3 wasn't played, I had Beep mis-id'ed as "Permanence"], and there was going to be an encore whether whe liked it or not, though most people enjoyed themselves very very much, lots of hardcore Pylon cones in the City, it seems.

Please do not leverage for material gain.
Please do not redistribute in mp3 format.
(stopped caring about that years ago)
CONED  (pCloud download + streaming)
While I couldn't locate any video of the proceedings that night, here's one from 8 years later featuring Vanessa with Pylon Reenactment Society....that Pylon was no more Randy is an ultimate testament to his presence and that PRS still honors their legacy and records their own material (well-worth listening to) is even more so....

Here's M Train, from 2016-12-12 at the Independent...
Also, for the first time, I present my recording of the openers, The Fresh and Onlys, featuring Tim Cohen, Wymond Miles, and Shayde Sartin.   More after the jump....
Read more »
Posted by thehappyone at 8:00 PM No comments:


A random item from the AMH archive, before I start in again on all my old recordings....

One of the last times the band played live before the unfortunate passing of guitarist Randy Bewley a scant few months afterwards.

I had been upstairs catching Savage Republic, as I figured since I had tickets a couple of nights later at The Independent, I could catch Pylon then...however, after SR wrapped up, I was able to see them perform their encore, M Train.  After witnessing the excitement surrounding them,  I wish I had stayed downstairs for the entire set....but did see it in full a couple days later back in San Francisco (as well as a produce a recording) which will appear in due time.

There's some footage online, including an amusing one where someone jumps onstage to join Vanessa...but the audio quality is subpar, so I'll leave it to your web searching skills to find more of these.

Medium Medium (who had played with them at the first Part Time Punks fest) for the following year opened their set with a heartfelt tribute to Pylon, which you can watch here...the video's pretty compressed, but is a very good listen and a brilliant cover.

A band that I had not heard of previously, who ended up greatly impressing me, especially the guitarist, who had a style just right of Andy Gill's.  Turns out they were another early-80s outfit that had only modest initial success before calling it a day but for whatever reason or another deciding to make another go of it.  In any event, a good pairing for Pylon and (later on) ACR.

Like all my PTP recordings, bass-overloaded, but nothing that a good re-EQ couldn't fix.

A bit of annoying chatter during the middle of 'Further Than Funk Dream' but otherwise a satisfying listen.

DOWNLOAD / Medium Medium live set
(pCloud)
Note, three of the tracks "Off We Go", "Hungry, So Angry", and "Guru Maharaji" were officially  released on the "Fluxus & Funk" release put up by Kommissar Hjuler.

Finally, here's a live portion of "Nadsat Dream" from this performance, originally filmed by Lyndsey Parker, but with audio synced against my recording.... 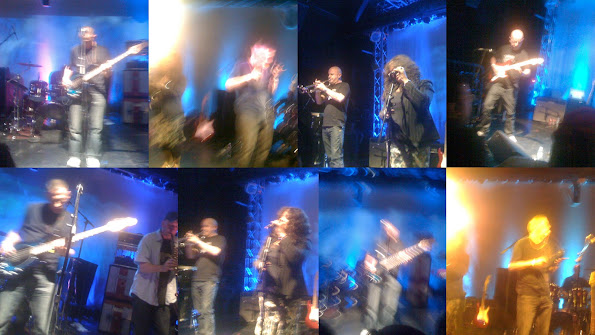 DOWNLOAD / Daytime Television (pCloud)
Bonus:  Live footage from The Nightengales, also from Lyndsey Parker.
As well as Love Is All...too bad the audio is distorted....
As finally, Mika Miko....this time from David (bossharmony) Orlando.  This is frankly brilliant (maybe the best 23 seconds you'll ever spend watching something on YouTube)....I'm bummed that I somehow missed their performance, again, probably got there too late....
Onto Part 3... 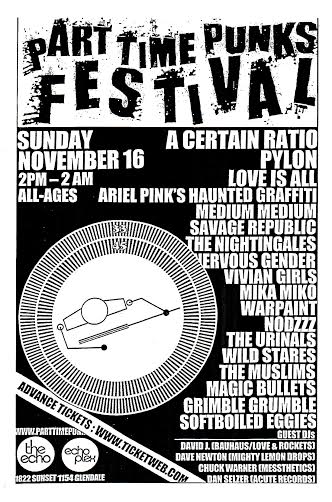 (photo from LosAnJealous)
DOWNLOAD / The Wild Stares live set (pCloud)
Both sets were recorded with an Edirol R09-HR with built-in mics, which did a pretty good job for what they are.
Part two...
Posted by thehappyone at 4:00 PM No comments:

Video of full set from Bottom Of The Hill, Feb 2008 (Paste Magazine)

All recorded by thehappyone using Sonic Studios DSM-6 mics plugged into an Edirol R-09HR.  These have not been shared widely before.

Excellent band fronted by Tricia Kanne (vox/keyboard/guitar), with Matthew Swanson (keys/guitar), Nick Forte (bass), Ross Grant (guitars), and Lauren Grubb (drums).  Lauren would later pound the skins for a bit for Topographies.  "Like I Do" is as terrific now as it was then.

Normally, I don't redo my FLACs for such old shows, but I noticed that the original set had final track "The Way You Are" cut at the 3:22 point.  I checked my original master WAVs and that was complete, so I went ahead and grafted the last minute or so from that onto the file, and while I was at it, I cleaned up some of the handling noise (decrackle filter plus channel cloning on the high frequencies), limited some of the loud clapping and whooping (mostly from yours truly), and applied automatic phase correction.

pre-gig  (1:18)
Old Home Movies  (3:34)
Stay With My Brother  (3:43)
I Feel Betrayed  (3:32)
The Prodigal  (4:47)
Table By The Window  (3:35)
Up Against The Glass  (3:59)
Sister's Telling Stories  (4:38)
unknown  (4:37)
Here I Go Again [Whitesnake]  (4:11)
Awaiting On You All [George Harrison]  (5:11)
outro (Brass Monkey)  (0:09)
12 tracks, 43:17.  How does the opening band end up playing the longest set?
Psych/power pop group.  My friend Josh released out their album on his Rocinante Records imprint.  Well worth seeking out.  This was years before...
DOWNLOAD/STREAM
Bonus video, this is The Botticellis playing acoustically as featured on The Mercury Sessions, which was a very short-lived music feature set done by the SJ-based newspaper.  They only did five total.
To quote from the posting...
From San Francisco's Outer Richmond district, the Botticellis love to make delicate pop music and love to surf. Members Burton Li, Blythe Foster and Alexi Glickman swung by on April 25, 2008, to chat with San Jose Mercury News music writer Shay Quillen and perform "Flashlight" and "Up Against the Glass" from their debut CD, plus the previously unreleased "Lucy Lucia."
Posted by thehappyone at 8:00 PM No comments: