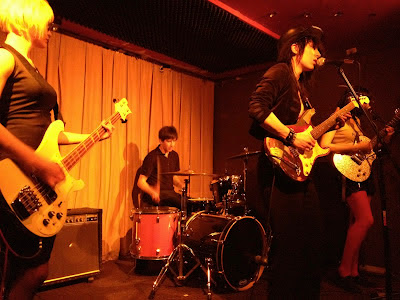 Recording done by thehappyone, done with Olympus LS-5 and its built-in mics, resting on the ledge stage right.

[end of between-set DJ'ing by Mike Shulman...Sham 69's 'Borstal Breakout']
Dead Like You 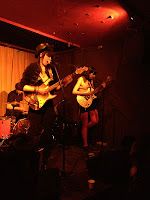 "Hello, we're Wax Idols.  Thanks for hanging out with us on this stupid unimportant night."

No kidding.  Usually, I try to stay home and away from crowds of sheeplike revelers...my partner in crime didn't even want to go out.  So I was left to my own devices, but decided there was no way I'd be able to resist a double dose of Terry Malts and Wax Idols, so nothing was going to stop me.  I packed some literature to tide me over, a copy of Evan Eisenberg's The Recording Angel and am feeling generally anti-social and disengaged.  Perfect.

"So, this record just came out, well, in October.  It's called No Future.  It's not a Sex Pistols reference!  It's actually how time doesn't exist, and there's no such thing as now.  So this whole thing everyone is celebrating right now is like not real.  Just sayin'"

The group then blazes through 'Gold Sneakers' and the remainder of the main set and realize they're still lots of time left, leaving them hung out to dry, as ANY OTHER band would string whatever to drag it out.  But that isn't what Wax Idols has in mind.

A guy suggests an extended version of an Iron Maiden tune.

"Somebody get me a drink, man.  About to do some spoken word or something.  We had this whole plan, we were going to stop right before midnight, and then countdown maybe one more song.  But we played for like 20 minutes...thank you...this is weird, this is why I hate doing shows like this, no offense.  We got like one song left, we're not going to make it!"

People call out for Prince covers.

"The cover was supposed to be after the New Year, you know it was like a plan." 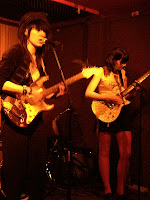 "Prince covers?  Naw, dude, no no.  You can't just play Prince on the fly, he deserves more respect than that.  That's fucked up."

"All right, well maybe this will go on forever in your mind, because time isn't real, so twenty minutes is like two minutes, right?"

Wax Idols then play 'All Too Human', perhaps the best live version of heard of it to date...but the song is less than three minutes long.

"Fuck it.  Corey, where's Corey at from Terry Malts?  Where is he?  Get up here, dude!  We're going to do two covers, because we play too fast.  So we're just killing time up here, y'all.  We're just going to wing it because we didn't plan on doing this, so whatever."

The crowd groans, and yells out some more suggestions.  Everybody seems to want to yell out their ideas on how to "help" Fortune and the band get through their "crisis".

"I wish I had some jokes to tell, but I'm really firmly anti- people talking onstage, this is breaking every rule I have for myself right now."

"How stupid is that when people...what I'm doing right now is stupid."

"All right we made it work.  Where are we at now, how many minutes is that, two?  I don't like when people play longer than thirty minutes.  I'm not Grateful Dead, alright?"

Phil yells out, "Hey Corey, play another one!"

"Now, quit what you're fucking doing, and then yell to have him come over here...[we have] another cover that's absolutely not like that one...totally stup...now."

A blistering version of The Undertones "Teenage Kicks" follows that gets everyone up and dancing.  It's two minutes long.  At this point, it's 11:51PM, still nine agonizing minutes to go. Everybody's wondering what else's going to happen, and if the band was going to make it to midnight.

I heard Shulman brought in the New Year by spinning Weekend's entirely apropos "End Times".  But I wasn't there to hear it, as at this point, I'm crossing Van Ness back to the car by the time 2011 rolls into 2012.

Posted by thehappyone at 12:06 AM No comments: 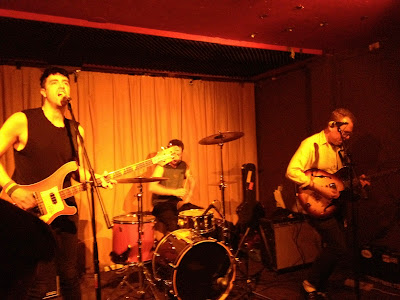 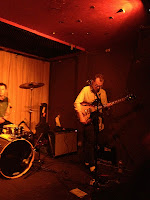 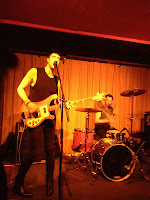 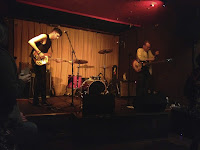 
Posted by thehappyone at 1:55 PM No comments: 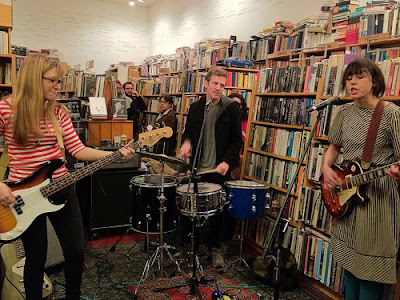 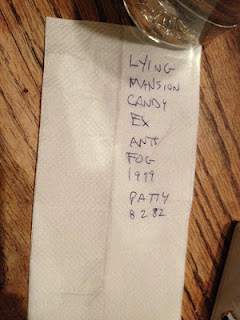 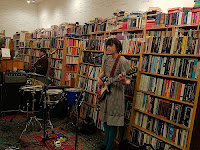 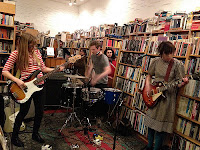 Read more »
Posted by thehappyone at 10:19 PM No comments: