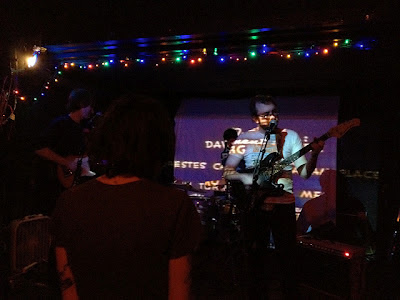 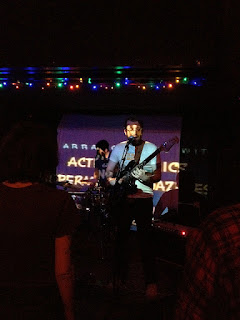 
Splendid stuff from Portland OR's Woolen Men, on tour with Australia's Woollen Kits.  Somebody pointed out the similarity in names and the rest was history.  I especially liked the new songs, which as of this recording weren't released, but may have been subsequently.  If you're looking for more, head on over to the band's Bandcamp page.


I didn't video, but here's the second track here performed at Bows and Arrows in Sacramento two days afterwards:


Posted by thehappyone at 2:46 PM No comments: 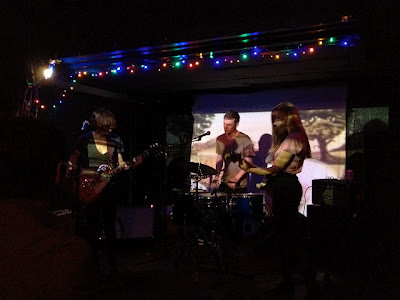 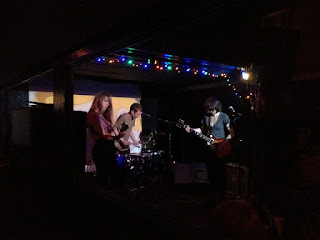 
PA music, soundchecking
Intro (the name of the song)
Mansion
Shallows
Lying In The East
Candy For Brains
I Listen To Lyrics Last
Fog
Vines
outro


This show was for me when the Mallard *really* started to quack through my thick skull and sear my brain with their face meltin' songs. Really liked this capture as well.  All the material here is from "Yes On Blood", please visit the Castle Face website to order your copy.


Here's a vid of Greer and the Dylans performing "Vines":

Email ThisBlogThis!Share to TwitterShare to FacebookShare to Pinterest
Labels: Greer McGettrick, The Knockout SF, The Mallard 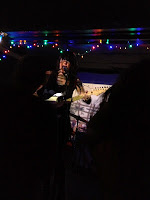 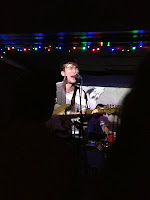 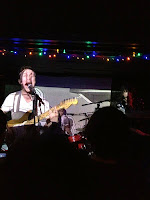 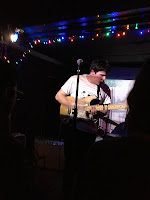 Just got back from the eighth time seeing these guys last night [the 23rd of May 2012] at the Rickshaw, the recording which of course will eventually be featured here.

Not even a broken string and high-pitched whine (whom Matt graciously thanked, haha) could derail another mutant psych-drone sesh from these guys, brought to you by the Mission's premier dive bar, Le Knockout, and the crazed sounds from the group's Oberheim/axe/drumz.  If you haven't seen these guys play, they somehow manage to swap instruments just about after every song without breaking the ferocious amount of concentration and commitment or pandering to the audience...well, mostly.  Occasional reminders still were being meted out at this point.

Live debut of 'The Artist Formerly...'  It slays.

I spent the time between sets reading Shaun Ryder's autobiog.  Perhaps coincidentally, or maybe not, a Mondays song was played over the PA.

If you STILL don't have their records, visit Castleface records and get that fixed, 'k?

The Mallard and Woolen Men from Portland sets are comin' up.

Posted by thehappyone at 8:54 AM No comments:

Email ThisBlogThis!Share to TwitterShare to FacebookShare to Pinterest
Labels: Adam Fincken, Blasted Canyons, garage rock, Hether Fortune, Matt Jones, psych-drone, tags are pointless but i feel guilty if i don't use them, The Knockout 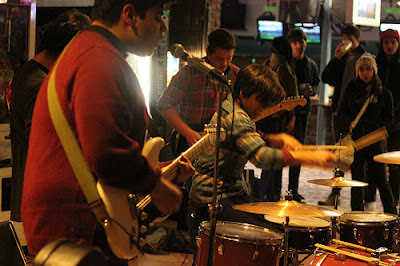 
recording by: thehappyone, using an Olympus LS-5 strategically placed on top of one of those kids-ride-for-a-quarter amusements. 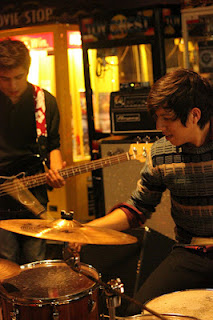 
The last of four performances that night.
It's well documented that member Frankie Soto of Surf Club was in an early version of Craft Spells, though they lean much more towards Beach Fossils in sonics, but with a Best West Coast sensibility rather than say, Jones Beach.


Unfortunately, the vocals at this point were buried pretty low in the "mix", but hey, we're talking about live music, and it still grooves.  It does feel like you're right there with them as they're playing.  If you look carefully at the top pic, you'll see the dudes from Weekend watching. 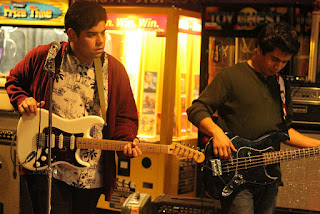 Alas, I don't have the names of the last three tracks, but I'm sure there will be a future release from those guys that feature them, as they're just as strong as the first five.


If you want more, head on over to their Bandcamp page to hear (or purchase, like I did) their Young Love EP.


Posted by thehappyone at 9:28 PM No comments: 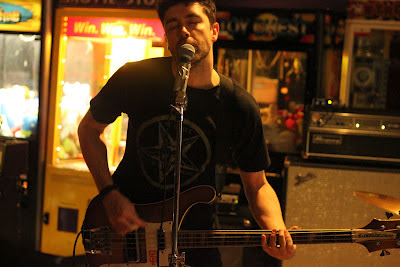 
equip: Olympus LS-5 (built-ins), laid out on a jukebox in the center of the floor

Something About You
In The Waiting Room
I'm Neurotic
Nauseous
No Sir, I'm Not A Christian
Tumble Down
Mall Dreams
Not Far From It


The Malted Ones were supposed to play last, I believe (could be wrong!) but Surf Club let them go on before...all throughout, the band wasn't sure how much time they had; thus the fairly unique running order.  All things considered, the recording came out better than I could have ever hoped, considering the lack of a PA.  I can't think of a better place to have caught them play, the background of arcade and vending machines is just so perfect for their gestalt.  It's just too fucking bad Serra Bowl is no more.  And the shouts between songs were hilarious.  "Jerry!"


As I write this, they're be opening for fabled punk group The Dead Milkmen at Slim's.  The show is sold out, so I'm thrilled they get a chance to impress people who haven't heard of them, even though I won't be able to make it since I was asleep at the wheel.


More pictures from their performance and the other groups can be found in my Flickr album.  I brought the Canon with me, so at least the photos are somewhat decent.


I'll leave you with a video of 'Nauseous' shot by Megan Dabkowski:


Posted by thehappyone at 8:51 AM No comments: 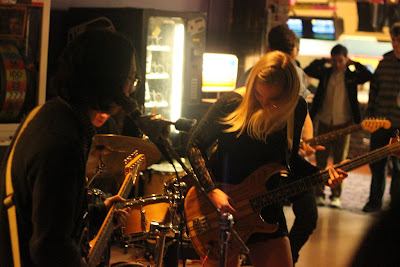 NOTE:  All the songs are featured on their, Newly Wed Nearly Dead LP which came out in August 2012.   Pay the Loglady a visit if you want a copy.

One of the most surreal moments for me in my forty some-odd years was hearing the sound of hazegaze/noisedrone backdropped by tenpins, so forgive me if I don't wax eloquent here.  I filmed two tracks, which you can watch below.  You'll be hearing more from this group as I plan to be at a couple of shows with them playing later this month.

The flickering video screens behind the band add to the mystique.

Posted by thehappyone at 8:43 AM No comments: 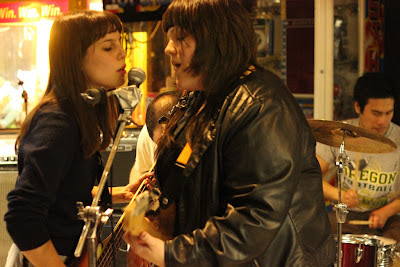 This week's installment of at my heels brings us to the now-closed Serra Bowl.  I remember bowling there many a time when I was younger, or coming along with my mom for her bowling league games working on chess games (I was a bit of a nerd, you see).  So the idea of having live music there when I first heard about it a couple of years ago just boggled my mind.  My one regret was not seeing the Blasted Canyons / Ty Segall show, but I did catch ECSR and Thee Oh Sees (I just fixed the links for that so you can hear it), which still ranks as my favorite live experience of all time.  So its what that I present the lineup that played the second and last live show I caught at this special venue, and have decided to feature all the bands individually. 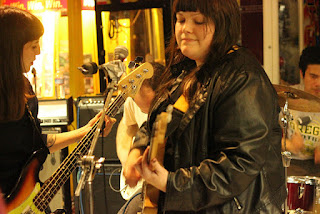 After a pleasant chat with Corey of Terry Malts in (where else?) the bar, it was time to see what the combined Stockton (Monster Treasure/Surf Club, playing first/last) and SF (Permanent Collection/Terry Malts, playing 2nd/3rd) had in store.  Actually, it wasn't nearly as organized...nobody had any idea what was going on and it was a minor miracle that it all came together at the end, though the first part of Monster Treasure's set was afflicted with sound gremlins at the start.

Recorded with Olympus LS-5, built-ins, resting on a table...I didn't feel the need to stealth for this show. 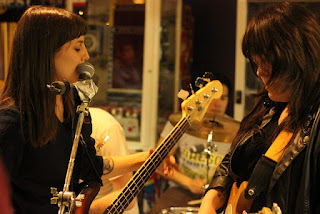 I was actually pretty blown away at how fabulous this group was, but I'm admittedly partial to fuzz noise with harmony leads.  Stockton has definitely come a long way from Pavement, okay it had to be said, and hopefully they'll shake that albatross for good.Please, please, PLEASE, head on over to their Bandcamp to check out their eponymous EP.  You won't be sorry.

And thanks to the wonderful Megan Dabkowski, bassist for Curse Words and Permanent Collection, we've got video footage of my favorite song from these guys, "This".  And somehow she avoided filming me (a good thing in my book).

Posted by thehappyone at 8:18 AM No comments: