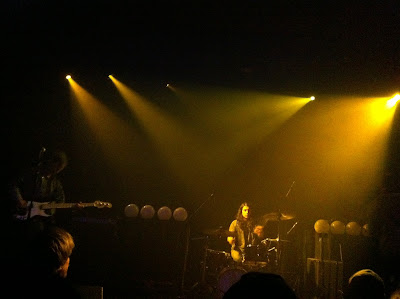 
A video of the elusive Jealousy...


Just crank these up loud, and enjoy.  I'm not sure what I can say besides this was the second time seeing Mark Treise (as Jelousy) play his bass drone Minimal Man-type set, which I quite liked.  Clipd Beaks reminded me of Crispy Ambulance but a bit less angular, they shall hopefully find their identity in time.

Weekend.  "End times" indeed.  Had there been a Rapture and the end of the world, this would have been the soundtrack.  The group brought these crystal colored spheres which gave the stagehand guy fits getting to work, but which added the appropriate color tones.

Shaun asked the crowd what people were going to do on Saturday.  Being a SF audience, some joker yelled back "Smoke weed!".  The response:  "Smoke weed?  You don't think much of yourselves, don't you.  Weed is about the last drug I'd do.  I'd smoke black crayons, because that shit is the hardest."  You just had to be there.

My favorite of the set was the song right after, a new one, with a Hooky-style bass riff, a spine of a drum beat and Kevin Johnson's soaring guitar squalls, and the plaintive cry of "Hazel" as the chorus...

Don't miss these guys if they happen to play in your town. 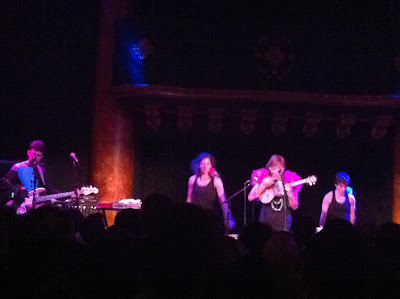 Not sure if any of you have heard of Tune-Yards, or any of their previous shows either tomzero or I have taped, but if they ever make it out your way GO SEE THEM.  This was taped last month by myself and tomzero, but I've only been able to get to it in the last couple of days.

The blend of our recordings sounds incredible, and it's an amazing performance...we made the right decision to hang back...as the PA mix was perfect from where we were at....keep your eye on DIME in the next hour or two.

I'm really tempted to seed this as 48kHz/24 bit...as this is a superlative recording, if I may say so.

For the standard 44.1kHz/16 bit, you can just grab it via the usual
means:

Links feature all the YouTube video footage, including a couple of my own iPhone 4 efforts. 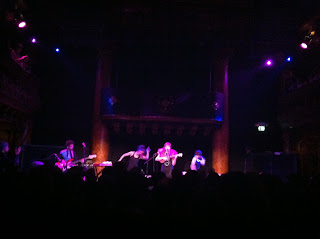 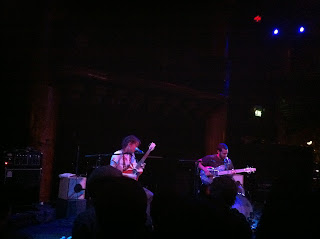 Bonus tUnE-yArds show after the jump...forgot that I had taped them twice last year, this is the second appearance which we saw during Popfest after being blown away at the Bottom Of The Hill show in late March.
Read more »
Posted by thehappyone at 12:18 AM No comments: 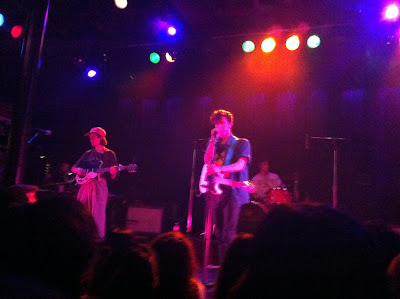 Featured in reverse order, three brilliant groups, two on Captured Tracks, and the third rumored to be joining in short order.

Both my friend and I were shocked to see a full-fledged moshpit form two-thirds into Beach Fossils set, but apparently this happens on a regular basis.  Some folks have said they sound like Wild Nothing, but in fact it's they who brought them to Captured Tracks, and they have a more 60s beachy/summery sound than their counterparts.  My favorites are Vacation, Calyer, and Daydream, and their energy onstage was impressive, even if the last several songs barely held together.    Support their music, visit the Captured Tracks ordering page and pick up some CDs/vinyl and catch them live! 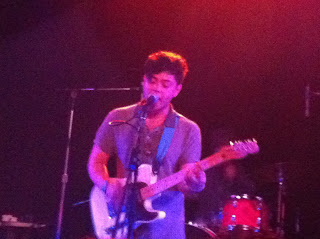 You Should Close The Door  [thehappyone]


Craft Spells are rapidly becoming a favorite of many, with their catchy songs and modern moods.  As the kids are wont to say, they killed it in front of a hometown crowd featuring some members of Justin's family, not much more I have to add besides go to the Captured Tracks website and order everything you can get your grubby hands on. 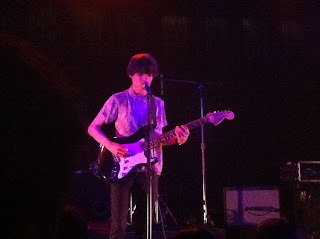 
[FLAC files in zipfile, missing start of 'Come On']

For me, these guys were a very pleasant surprise, and illustrates all the absolutely brilliant bands that make San Francisco and the Bay Area home.  A bit bummed that we missed some of the first track Come On, featured on Michael Stock's KXLU 'Part Time Punks' broadcast, since we got to Slim's slightly late and this show (in a departure from normal SF shows) actually started on time.  The second song (don't know the title currently) is probably my favorite.

Will be checking these guys out when they open for Terry Malts (featuring members of Magic Bullets) early next month at the Knockout.  Bought their Underwater Peoples maxi-ep/mini-lp right after their set.


Posted by thehappyone at 10:32 PM No comments:

Italicized songs are unreleased, so the the titles given for those are provisional.

Can Mike Sniper and his label do no wrong?  I guess not.  Nick Hessler and compatriots have succeeded in putting Oxnard, CA on the map.  I've heard the term 'beach music' applied to their songs...imagine the Beach Boys fronting a shoegaze group.  Okay, that comparison was a bit lame, but you get thie idea.

I encourage you to browse the Captured Tracks releases page and...buy everything on it...like now. 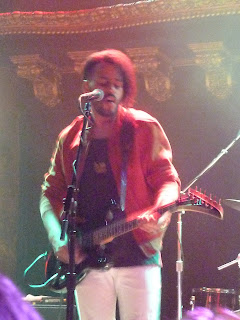 TZ0 recording.  Same as above.

For various reasons, like arriving a bit late for Catwalk, thus missing the first three songs, and not hitting record properly for Twin Shadow (meaning only caught the last part of 'I Can't Wait' and the last three songs), my own recordings ended up incomplete, but nonetheless I've made these available.  Sorry for dropping the ball on this one. 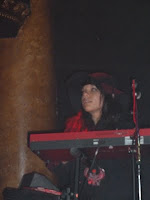 Given the blog's title derives from one of Twin Shadow's songs, you can imagine I'd be enthused to catch them live again.  And indeed, I was.  George Lewis, Jr had the crowd wrapped around his finger.
According to this eyewitness report (for some reason this doesn't mention Catwalk), it seems the show may have sold out from people going to see Twin Shadow, even if they were one of the opening acts!


Both Catwalk (on Captured Tracks) and Twin Shadow (on 4AD) were excellent.  In fact, the audience reaction as positive and enthusiastic for Twin Shadow as it were for the headliners The Pains Of Being Pure At Heart.
Link for this is here:  TPOBPAH


The Seattle show got a couple of songs for the encore that we didn't get at all in SF, lucky bastards!   Thanks to SR for making this recording available. 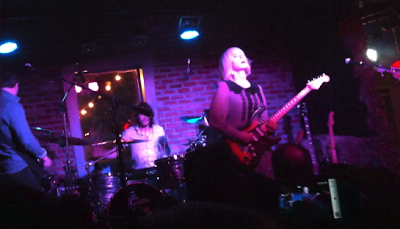 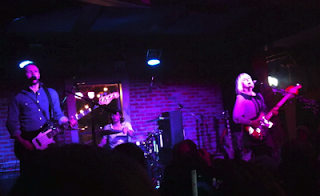 I Don't Want To See You Like This
Whirring


Rainingvodka (whom I met at this show and is a stand-up gentleman) has generously put up his recording on DIME, which you can grab if you're a member there:
(24 bit version)
(16 bit version)

A complete video can also be viewed on YouTube.  Shot mostly with my iPhone4, except for 'Whirring', which was done with the Flip Video, and 'Cradle', which features our sources blended in with the above rainingvodka recording, the audio files I have linked are more complete than on the video version since it includes the bits between song there's no video bits for.

I make no warranty that the blended recording is any better than any of the recordings separately, especially since some slight synchronization discrepancies may have been introduced (I can't be a fair judge, as I'm pretty intimately involved with its production), though I really do believe it sounds absolutely stunning.

The Joy Formidable put on a stellar effort for their second show in San Francisco, the first being last year's Popscene effort.  The exuberance of a certain member of the crowd towards the group throughout has to be noted.  'Greyhounds In The Slips' has a sample from "Jesus Camp" ("Warlocks are enemies of God") triggered by the drummer which was really cool.

The group possess such energy on stage, all the more impressive given how many shows they've played over the past couple of years.
I can't really focus on any one song because all of them were delivered with authority and passion,  but the end of 'Austere' gets a mention for Rhydian's head-bobbing.    Be sure to catch my video on YouTube, it's not as good as being there, but it'll have to suffice.


Openers The Lonely Forest put on a fine show. 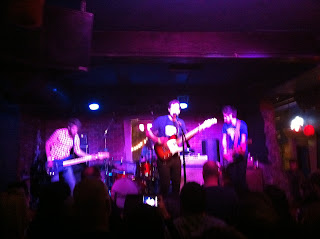 
We Sing In Time (acoustic in SF)

Interview with the group after the show.


Posted by thehappyone at 1:58 AM No comments: