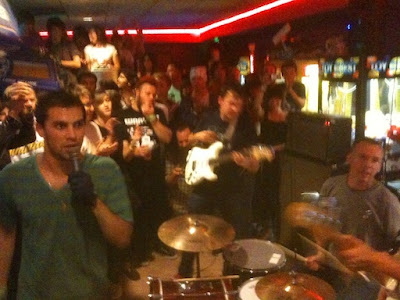 For your listening pleasure, here's Eddy Current Suppression Ring  live at Serra Bowl, at an free all ages show back at the start of July.

Outstanding quality, only marred by someone (who was also at the Eagles show) talking through 'I Admit My Faults', as well as some of yours truly whooping and a bit of stereo field shifting for when Brendan walked out into the audience.  Some more video, including 'Get Up Morning', 'Memory Lane', and 'Sunday Coming', can be viewed here.

NOTE: I'm aware that some of the linked photos are broken, I'll be working on getting these back online...somehow...

First of all, you have to understand that we're in a bowling alley.  With people bowling.  I have memories of the place when I was 11 or 12 accompanying my mom back when she was in a bowling league, and sitting working out chess games while pins fell.  That this show could even be booked in such a venue by John Dwyer (Thee Oh Sees) just staggers my imagination.  Just fucking amazing.  Somebody else in blog-land had commented about the rhythm section of this group, with 'I Admit My Faults' bring shivers up their spine.  No kidding...And if 'Wrapped Up' and 'Which Way To Go' aren't up there in the best things to come out in the last 10 years, I'll eat my shorts.  Being able to see them up close must

have been the same feeling Aussies had when seeing The Saints around the corner at one of their hotels or Brits being able to see an early Joy Division at the local youth club.  Just intense.

And as amazing is this was, what was to come once Thee Oh Sees took the stage was on a level beyond...oh my God, I'm still in awe at what I witnessed.  It was probably the most enjoyable performance I've ever seen in my life, for the sheer positive energy this band seems to engender.  If you're wondering, my recording fell apart after the first song (the pit dislodged my batteries), but I'll share what I got, as I hopefully have a contact with somebody else taping, but not sure if he managed to get the whole thing (Ed. note, he didn't, sadly).
Warm Slime (Summertime Jam) was featured as the lead article on the Bay Bridged site that did a great job in dissecting the song...it also mentioned that they were recorded by John Baccigaluppi who of course recorded the Vomit Launch albums....So, this gives us the following fragmentary documentary sources...we have this setlist because I had the foresight to call bcingyou and let him listen to it.1. Enemy Destruct [thehappyone aud]2. I Was Denied [thehappyone aud, 10s + rewplayff 420p video (mistitled), audio ok, incomplete]3. Meat Step Lively [rewplayff 420p video, audio ok, inc.]4. Tidal Wave5. Block Of Ice  [DannyBSnacks 720p video...audio is good on this!]6. Crack In The Eye7. Ghost In The Trees8. AA Warm Breeze9. Contraption10. Warm Slime (Summertime Jam) [rainivision 420p video, inc.]

I also managed to record Fresh & Onlys earlier, with both older kids in tow, since I had the bright idea that they might want to catch an all-ages event like this, which ended up being somewhat of a failed experiment, sadly.  Unfortunately, the vocals were almost inaudible during the mix, but the recording's otherwise decent.  The sound greatly improved for the other sets.

Apologies for the start of Waterfall where you can hear the younger son state that the oldest wanted to leave...ended up missing much of Sic Alps as I drove both of them back home and returned
in time to catch the other bands.

Posted by thehappyone at 1:46 AM