tracklist:  soundchecking / Wave Goodbye / If I Can't Have You / Do You Want To Rock n' Roll With Me / Pine Cone / Birdies Singing / Fire Escape / Baby, I Got News For You [Peter Miller] / Mount Fuji

One of my favorite shows of 2010 (don't worry, I'll be featuring the headliners Thee Oh Sees and Eddy Current Suppression Ring soon enough), we got a double dose of the talents of the esteemed Mr. Stoltz both as drummer for Sonny And The Sunsets and frontman for his own solo act, backed by a full band, every tune a catchy slice of pop goodness.  The applause at the end was heartfelt.


Here's a profile that appeared in the SF Bay Guardian that captures how sweet a guy he is.  The stills illustrating this post are vidcaps from ezilu's recording of "Fire Escape", which is well worth watching.  Apologies for the chatter during the first couple of songs, the people around me were doing a bit of catching up and weren't giving their full attention towards Mr. Stoltz.  Do You Want To Rock n' Roll With Me, in particular, was quite catchy.  And you got to like the use of xylophone in a couple of these tracks. 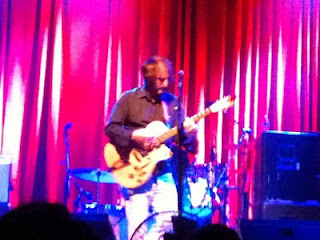 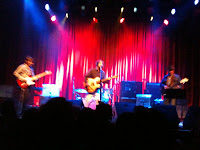 tracklist:  Wave Goodbye / If I Can't Have You / Are You Electric / Owl Service / "bunnymen cake story" / Pine Cone / "shaking will sergeant's hand" / Baby I Got News For You [Peter Miller] / Mount Fuji


This is Kelley Stoltz' opening set for Echo and the Bunnymen.  The Bunnymen cake story was worth the price of admission alone.
Interesting tidbit, Kelley calls the "A7 and even A9" California chords, and features both quite prominently in "Owl Service".  And the Peter Miller cover is neat.


Snaps done from my iPhone 3GS, they're all somewhat blurry.
(took some of the headlining Echo and the Bunnymen, as well)

And, please folks, if you like what you hear, click here to sample and buy some of his stuff!  His latest album (as of this writing) is called To Dreamers, I'm bummed that I missed out on the bonus CD-R...
Posted by thehappyone at 12:19 AM