Let's talk tools of the trade.  The trade in question being taping.  Up until August of this year, I had used an Edirol R-09HR, which still services me well as an audio capture device hooked into my turntable and Nakamichi cassette recorders.

However, one of my cohorts had mentioned all the back in November 2009 this unit would be coming out, so I decided to pick up the Sony PCM-M10 recording.  And after using it this past couple of months (about 5 shows total),  I have to say the new Sony recorder I have blows my Edirol out of the water...


So I made a list of advantages the PCM-M10 has over my Edirol R-09HR (and other comparable recorders made by Zoom or M-Audio). This is directed for anybody currently taping or is thinking of doing so, or runs into issues with their current kit.  In my humble opinion, anybody still using MD or (gasp!) DAT should run, not, walk to upgrade to this unit.

* Connecting the unit to USB to retrieve recordings uses power provided through the USB port, unlike the Edirol.  Both units treat the flash storage like a removable hard drive so no worries like with previous Sony MD units of using their crappy SoundStage software to convert from their proprietary format to WAV...


*  Visible indicator lights for -12dB and overload (over +0dB) for both L/R ch.  And like the Edirol, also has visible recording light, which like the Edirol, you can control whether you want it to stay on or off during recording

*  Startup time is about 5 seconds vs the Edirol R-09's 11-12 seconds, and the Zoom's 15 seconds (not sure how fast the Microtracks are).  5 seconds is phenomenally fast!

*  The unit has a 'pre-record' feature that saves a few seconds of audio while in pause mode.  The Zooms do this, the Edirol does not, and I don't think the Microtracks do either.

*  Adjustable volume knob that doesn't make clicking noises in the recording...it's recessed and isn't flush with the front of the unit, and is sturdy, so unlikely to get rocked. 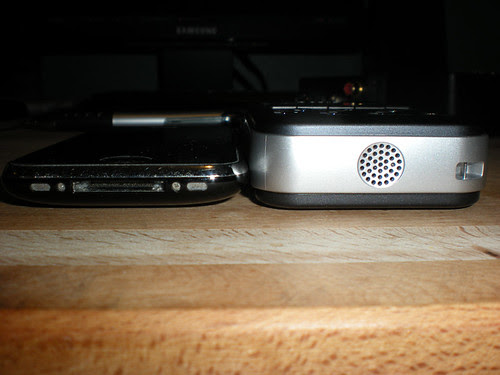 *  Built-in mics that are pretty decent, compared to the Edirol's....and are as good as the Zoom H4's.

*  I like the controls a bit better, it's harder to hit them by mistake...and the power/hold is a single rocker button on the side of the unit.  And the battery case isn't flimsy and isn't likely to have the door spring loose and batteries fall out, unlike the Edirol...lost a couple of recordings because of that.

*  Wired remote control...this is an advantage because Edirol's wireless remote is RF and requires line-of-sight.  So this is actually useful for those people who like to record in pocket.  Unfortunately, you cant turn the unit on/off via the remote...but in all practicality, it's useful when using the built-ins to reduce handling noise...for externals, it's less important.

*  I got mine for $200 USD online from B&H Photo, my favorite Sabbath-honoring electronics retailer.

*  The Amazon and Google reviews online are positively glowing, averaging 4.5-5 stars.  Anyway, enough of that... 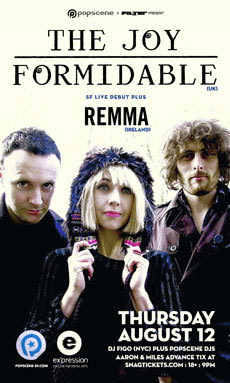 Okay, now that you've made it this far, I'll reward you guys with another one of my recordings, which was the second one made with the PCM-M10.  More info after the jump...

I know there's a couple of folks out there who are mad for The Joy Formidable, featuring Ritzy Bryan and a couple of lads, so here's my recording of their show last night at Popscene, done with my new Sony PCM-M10 recorder.

Tomzero also recorded the show...he's the real fan here, said it ranked up there against folks like Lush and Adorable as among the best shows he's seen.  And he's seen hundreds of shows...What I ended up doing was matrixing his recording with mine and putting it on DIME, it's not running anymore there, but if you look in the comments...

It turns out TJF is very taper-friendly, which is why they have been extensively documented, if you're lucky to have access to DIME, you can swoon over what's been posted there over the past year or two the Formidables have been playing.  And the FX pedals (to the right being Ritzy's and up above are the bassist's) are jaw-dropping.
Torrent information:

This group has been one of tomzero's favorites over the past couple of years, so I was eager to accompany him to see them play. I really enjoyed the between-song sampled dialogue (Hello, Christian Bale!), and 'The Greatest Light Is The Greatest Shade' as heard here makes the hairs on the back of my neck stand up.

We seem to have gotten an abbreviated set compared to the previous night's San Diego and LA shows, but that's how it goes sometimes. Maybe if Popscene focused more on the bands and less on playing at disco, we would have seen more. I'm not bitter, but while they seemed to go over well with the crowd, we could have been served better, and in turn, been a better audience for the Northern Welsh band.

In any event, I was really happy with how my version turned out, as I'm really liking my new Sony PCM-M10 unit over the Edirol R-09HR which I've just relegated for tape dub capture use. The stereo mix here seems to work really well, tomzero's is more trebly and drum-heavy as he was on the right side, my left-sider is more bass-heavy....

Please support The Joy Formidable by seeing them live and buying their recordings, don't leverage this recording for material gain, and keep it lossless if sharing, preserve this info file, and overall, ENJOY!

The opening act was an Irish outfit called Remma.  They were pretty good.  I also need a bit of help ID'ing a couple of tracks.

NEXT POST:  The first show I taped with the PCM-M10. It'll throw you for a loop.
Posted by thehappyone at 12:03 AM