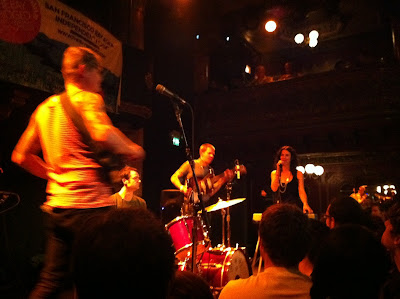 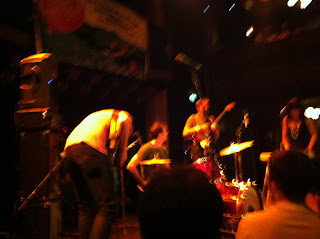 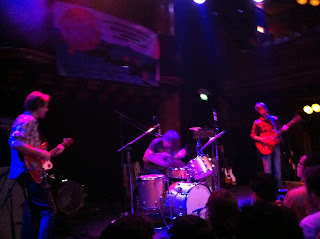 Thee Oh Sees were mind-blowing.  Up there with Eagles and Serra Bowl...I probably sweated off a couple of pounds right in front of JPD....they were on stage rather in the front of it though, but otherwise the GAMH turned out to be a really good place to go see them, if not as intimate as previous spots. Holy Shit Double Death setlist.  NO letup from songs two through nine. We separated fairly early on, so TZ0 filmed the setup/soundcheck and the ENTIRE show from the balcony using my Flip UltraHD...clear view of all four members and the audience, so a pretty unique document, as TOS don't play in many places with balconies...if you look carefully, and know what I look like, you can spot me bopping away.

I bought a Save KUSF hat for $5 which promptly fell out of my back pocket, ended up getting tossed on stage, but got swiped by some kids before I could retrieve it by the end of TOS' set.  Oh well, it was for a good cause. The other bands, quickly:Sandwitches were good, I filmed the first four songs (iPhone 4) until somebody (ahem, it was JPD and a couple of his buddies) walked in front of my line of sight so had to abort the rest of the filming.  TZ0 got a couple of songs using his digicam upstairs. Really liked Ty Segall, he got the crowd moving too...bought his live album from the merch booth and had him sign it afterwards.  Nice guy.  I filmed two songs, one with iPhone 4 and another with my Flip.  TZ0 filmed a couple as well with his digicam. The consensus between us was that Sic Alps didn't quite do it for us.  Nobody moved at all, though musically the last part of their had some OK songs.  Now I don't feel so bad using their set to ferry my kids back home when they played at Serra Bowl, though I think the recording does support their case a bit more than what we felt at the time.