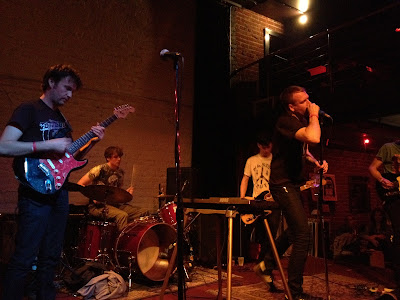 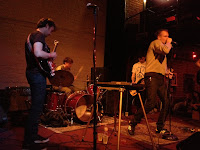 Ended doing this one more alone, as my partner in crime was a bit tired, and we would be seeing TC again in December anyway.  Quite a few people were eager to check them out on the strength of Henge Beat, which many deem to have been the best release bar none of 2010.

Despite appearances, I'm not actually the loquacious sort, so I'll let sometime-contributor and Redlands legend Markie describe them:


Featuring the magnificent Mikey Young of Eddy Current Suppression Ring on guitar and Daniel Stewart of UV Race on vocals . Stewart's monotone vocals fit perfectly with the pummeling rhythm section laying down a tense and infectious style incorporating late 70's postpunk/new wave with garage rock elements. But Mikey's off kilter licks and descriptive intonations on guitar are the real voice."


Let's just say that they lived up to expectations, and indeed may have exceeded them.  'Carpet Rash' is a juggernaut, and is one of the best things ever, and the rest of the set was not much worse.


Setlist is as you see it below, saves me some writing. 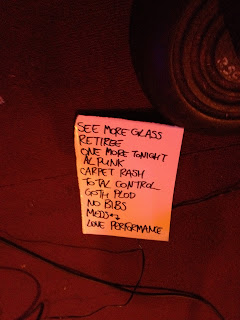 Because I was right in front and concentrating on video, my positioning was a bit sub-optimal in terms of the sonics, but I've done what I can to make it palatable.

A couple of songs really remind me of A-Frames, and of course the final song 'Meds' could easily be an ESCR jam.  Excellent performance all around, I was lucky to have caught the whole thing on film, right in front of Mikey and Daniel. 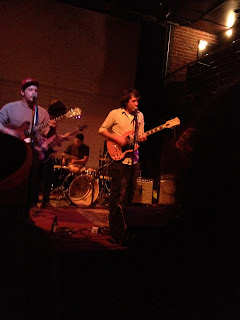 Openers were Mikal Cronin (and croni(n)es), whom I had not seen before.  Was in a better taping spot for these guys, but a bit more distant.  I thought they were pretty good, but not earth-shattering.  That's just my opinion though, I was hampered by not being familiar with their material.

A fellow recordist has come up with the setlist, many thanks to his efforts identifying these tracks! 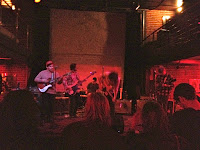 According to him, "You Gotta Have Someone" and "Tide" are unreleased, but will be coming out on a Goner 7" in late November or early December.  The remaining tracks are on their debut self-titled album on Trouble In Mind.

Thee Oh Sees to follow...in the meantime, here's a photoset of all three groups.
Posted by thehappyone at 8:10 AM