(info files as originally posted, with current comments in italics)

This is the same seed posted to a certain Bittorrent lossless recordings of independent origin site of some renown shared later that night, if I can believe my notes...most likely this was really a couple days afterwards....though I remember at the time I was *very* enthusiastic about this show.


Here's my recent recording of the fabulous The Bird and the Bee.  The Independent was packed on a Monday night to see this group, which features the daughter of Lowell George (from Little Feat)  playing in a synth-pop duo.  The 80s are back!  Or was it electroclash finally becoming popular in LA?  Crowd was pretty sedate considering the place it was filled, so I'm guessing the group was a bit more casual than the usual wild bunch that go to see shows here.  :-)

Will also put up Obi Best soon (which I did)...they were a very pleasant surprise, and of course Alex and Wendy from that group also help out on backing vocals and random instruments.

* DO NOT USE THIS RECORDING FOR ANY SORT OF MATERIAL GAIN.
* I'M OK WITH TRANSCODES AS LONG AS REFERENCE TO THIS LOSSLESS ORIGINAL IS RETAINED

THE BIRD AND THE BEE  (pCloud link)

As a bonus, I also assembled a YouTube playlist of footage from this show, which starts from "My Love", which you can click on below.

"This was shot with a Sony HVR-Z1U, Audio is from Church Audio 9100 Mics and Pre-Amp to a Roland R09 16/48. Taper = Derek Dubuque (Drock). Thanks to Inara, and the Independent for allowing me to tape."  Indeed, this source sounds outstanding, and better than my effort.

I believe at one point I received the entire gig on DVD, but have to find that.  If I do find it and it includes more than what's online, I'll update this and share it.

Obi Best after the jump... 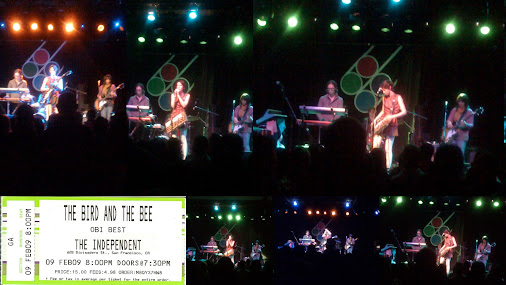 Alex Lilly is a Goddess.  She definitely stole the show for me, though that's not to take anything away from either the daughter of Lowell George or the famous multi-Grammy (7!) winning producer she plays with here.

In addition to doing backing vocals for the fabulous The Bird and the Bee, she leads her own outfit called Obi Best (they were called Colorforms but didn't want to deal with licensing the name from the toy company that holds that name, evil toy companies!).  I found the first song surprisingly twee (aside from the bit where the synth gets out of control), but that's not a bad thing, and the remaining songs are really strong.

Sound gets muffled during 'Swedish Boy'...probably due to my jacket covering up the mics briefly...that was remedied.

In addition, here's a YouTube playlist with all known footage (first vid is a montage of all songs from both bands) which also includes "Swedish Boy" and what I had titled "Desire" since it was unreleased at the time but is "Tropical Fish" which came out on 2011's Sentimental Education EP.  You can view it below as well.

At least until you-know-what hit, both Inara and Alex were still going strong, as The Bird And The Bee were still touring in 2019, and Greg Kurstin went on to be a producer of quite some renown, and while Obi Best is no more, Alex has a few more recent EPs up in the usual places that are worth a listen...but to me, Obi Best musically were far more interesting.