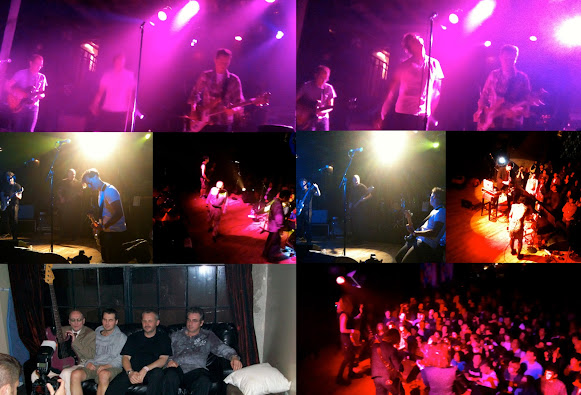 Going in performance (forward) order....this is an archival record of everything that I've turned up for this show.

To date, no footage or recordings appear to exist for GRASS WIDOW / NODZZZ / WEAVE...  There's one track for VIV ALBERTINE, which I'd make up for in LA.

While FOR AGAINST was listed on the flyer, they had to pull out at the last minute due to logistical issues.

While I was up in the mezzanine hearing Viv practicing on her guitar, there's no documentation of her set either.  "Gang Of Four" was indeed just Hugo Burnham DJ'ing as the flyer says, and while we videoed nearly all of Section 25, it's only via the horrible overloaded digicam audio (a Kodak unit)

And even The Raincoats recording got cut off, due to...read on... *sigh*.

The first track (or second) "In Love With Witches" was videoed...

The rest of the set was captured, more or less.

taper: thehappyone
equip: Sonic Studios DSM-6/L mics > Edirol R-09HR
setlist : Pretend and Descend [fade-in] / A Day Not So Far Off / Lying Around / The Upstairs Flight / The Book Is Closed / Sigh The Day Away [cut]

The sixth song is only a little over a minute long, as my jumping around caused me to miss most of it...
I apologize in advance for my excessive enthusiasm heard therein, though others who have heard this don't seem to mind it so much. You can't tell from the picture, but Phil's T-shirt read "Where's Claire Grogan Now?"
But they were truly a special group, and fully deserved every bit of encouragement, and I count myself as blessed to have befriended Phil, Corey / Nathan, and Ryan through their later projects.

Audio of set on YouTube
Magic Bullets - DOWNLOAD (pCloud)
Savage Republic
We only have digicam footage of the last three tracks.  The setlist is as follows:
setlist:

Authored DVD of these two tracks (pCloud)
Section 25
Again, this only exists as a video.
Setlist:
intro [0:00] Gene [1:20] Friendly Fires [4:52] Wretch [10:38] Can't Let You Go [14:00] Dirty Disco [22:42] Looking From A Hilltop [27:09] After Image [33:10] Shadowplay [37:30] Poppy Fields [43:16] (very start only, cuts)
Due to various failures, this is the only record our collective has of this performance.  At least one or two other people did record, so it's hoped they have the complete show, as the last track (Poppy Fields) is mostly missing, as Mark's camera batteries ran out.  He held the camera for the first couple
of songs, I took over to allow him to concentrate on his audio recording, which  turned out to be white noise due to a defective mic.  I had thought my recorder had dead batteries, but in fact they just got jostled.  I did get some of the Raincoats' set...had much more success at LA's show...being backstage overhead the stage was a bit "disconcerting". (read: amazing)
The footage is surprisingly watchable, even if it's grainy due to the digicam and the relatively low light levels.  I actually *like* the grain, makes it look film-like.  The sound as heard on the original was a clipped mess, but  has cleaned up nicely, so given it's mono and slightly better than phone quality,  is amazingly listenable.  Steve Stringer's guitar style takes some getting used to, he's a bit more florid that Butterworth was.
Photos include my usual blurred iPhone mess (same PoV as the footage) and some of Mark's pictures backstage with the band.  You get to see James Nice  in one of them as well.
Shadowplay  (Trevor Bassen)  ...different (standard) angle
Poppy Fields (Trevor Bassen)  ...different (standard) angle
DVD of this performance  (Mega.nz)
The Raincoats
2009-10-09
'Part Time Punks' mini-fest
The Mezzanine
San Francisco, CA
taper:     lammah
lineage:   Edirol R-09HR w/built-in mics >
Adobe Audition [normalizing/downsampling/tracksplits] >
FLAC
Tracklist:
00  soundchecking/intro [6:17]
01  No Side To Fall In [2:17]
02  No Looking [3:24]
03  [trouble with digital amp/talking] [2:58]
04  You're A Million [3:41]
05  Shouting Out Loud [5:31]
06  Don't Be Mean          [5:33]
07  I Keep Walking   [4:28]
08  Babydog          [4:40]
09  City Girl          [6:44]
10  Only Loved At Night [4:09]
11  No One's Little Girl   [4:18]
12  [more trouble with digital amp/very start of 'The Void']  [5:00]
total 59:15
The audio can be listened to here:
The Raincoats' set can be DOWNLOADED (FLAC)...basically what I shared on a certain lossless Bittorrent site but with filenames matching tracknames...
Their first SF performance ever!
Quite enjoyed the set from the Raincoats, whom I wasn't familiar with at all (perhaps unfairly negatively influenced by all the Cobain uber-hype given by his namechecking of this group), at least until the start of 'The Void' where 'some drunk' (my friend Tom, completely by accident) kicked my Edirol from the edge of the balcony area I was taping  from down onto the stage.  Luckily, it escaped unscathed, but it would have been too much to expect it to keep running.
The sound is as good as you can hope for considering it used the built-in mics, and that the principals were having problems with coaxing a pleasing guitar sound out of their digital amps, as you can hear quite plainly in the long pauses between a couple of the tracks.
About the only complaint is given the location, at times the drums are really LOUD.  I found myself playing the guitar riff to Only Loved At Night afterwards, not  realizing from where I had heard it...proving that the best music works its magic long after the fact.  And No One's Little Girl is decades ahead of its time.
Here are some Youtube links if you want to hear/view some of the songs that I wasn't able to record.
*songs not taped*
xx  The Void
xx  Adventures Close To Home (w/Viv Albertine)  (GilW)
xx  Lola (w/Viv Alberine)  [The Kinks]  (GilW)
--
xx  In Love
xx  Fairy Tale In The Supermarket  (GilW)
Lola [The Kinks] (goingforawalk)
Lola [The Kinks]  (thehappyone)  ...I did camvid this one...
And for some more earlier in the set...for all of GilW's just click through to watch.
No Side To Fall In (GilW)
Trouble With Digital Amps... (end of "No Looking") improved audio to my original share...
You're A Million (goingforawalk) - visuals
Shouting Out Loud (GilW)
Also from Viv's set, Confessions of A MILF...  (GilW)
I haven't turned up a full "The Void" or "In Love", but I know there are other recordings out there, so share 'em if you got 'em.
As you can see, we were well situated, and got to watch a part of the set with the absolutely fabulous Viv Albertine, who eventually joined Ana and Gina onstage.
And yes, I did tape both Viv and the Raincoats in LA, both in full.  More on that when I get to it!
REMEMBER KIDS
*  No leveraging this recording for material gain.
*  Transcodes to MP3 ok (not on DIME of course) but preserve source info please.
*  Enjoy the music!
Posted by thehappyone at 8:00 PM