I captured one song visually, linked above.  The audio is a blend of two different recordings.

Most of this set was filmed with my iPhone 4.  The audio is a blend of two different recordings.


Courtesy of SR, another brilliant recording with his Schoeps.


For all Seapony videos that I've found on YouTube....

Posted by thehappyone at 11:27 PM No comments:


It's my pleasure to bring to you the purveyors of one of my favorite LPs of 2011 (so far).  Blasted Canyons' #1 album is a sheer delight for those who like face-meltin' noize-psyche-garage-rock, the proverbial brown note for making the 24th-and-Church "hipster" set check the insides of their boxers for stains.  So don't you dare even consider going on until YOU HAVE BOUGHT THE DAMN THING.  No LP player, you ask?  Well, you can try going to one of their shows and hunting down a CD promo copy (I much prefer the vinyl, but did buy it on CD as well).  Or wait for the download card.  Or pick up a turntable and spin some wax to create your own personal digital version.

Let's face it, I was not put on this green earth to pump out blogorrhea like some balding failed post-rocker-turned-Pitchfork writer.  I'm playing with fire just mentioning hipsters.  And it's not like I can really do anything to stop you, anyway.  So enjoy yourself while your brane melts to these jams.

Mini-review:  Set cut a bit short due to technical issues.    Really highlighted by Matt Jones being out front and bringing it.  A fine prelude to John Dwyer and co.'s merry mayhem.


Unfortunately, I had just flown back in from Vegas and was too tired to venture out for this one.

So imagine you're back in school and your friend's parents are out of town. Let's have a party!  You can set up a bar in a corner. Maybe stock Tecate and Miller Lite.  Might as well get in some whiskey and vodka.  It's your friends, so you won't charge, but you'll take 'donations' for the drinks.  His parents have a cool basement.  There isn't a stage, but some of your friends are in a band, and they'll be happy to play.  The mics might not always work, but hey, punk rock.

Pretty much sums it up.  It was like going to a house party except I didn't know anyone else there.  Early show?  I got their supposedly late-ish (9:45) and of course, the first band hadn't finished setting up.

To cut to the chase - first band - pretty interesting. 2nd - the return of hardcore.
Unfortunately at this point a couple of *really* drunk people showed up and decided to start a mosh pit.  Unfortunately, the slamming wasn't contained to the pit and I saw a couple of people who weren't willingly slamming get knocked pretty hard.


Blasted Canyons started to soundcheck and immediately had mic problems. They finally fixed it, sort of.  They played a good set. Unfortunately, it didn't sound that way.  Feedback most of the way through.  I'd say maybe the mix was off, but there was no mix.  It's your friends playing in a garage.  The drums weren't even mic'd. and I think they gave up on putting a vocal mic by the drummer.  I was in a good spot at the start, but the moshers showed up 2 songs in, and I was forced to move.  I didn't get a single photo, but there was a woman at the front who i believe videoed most of the set. It'll be interesting to see if and where this turns up.


[Note: the footage has been posted in part, see below]

The magnificent OutOfFocusSF visually documented the last two tracks for posterity.  Hopefully the rest of it shows up at some point! 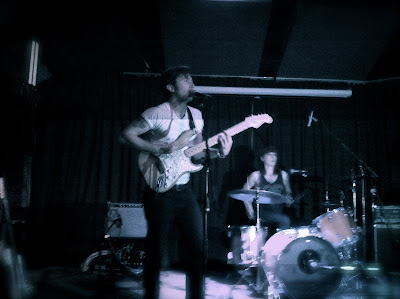 Same setlist as the Engine Works show from two weeks before.  Weird place in terms of vibe, kinda a wine dive bar with a great sound system and lots of space to watch bands, opened by the guy who runs the Independent...so the sound came out superb, in fact, it's probably one of our best pulls, except that I yelp all over the recording.  But it still must be heard, it's stunningly gooood. 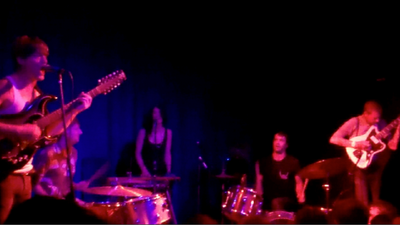 Royal Baths
No idea, any help appreciated!
Posted by thehappyone at 9:46 AM 3 comments: