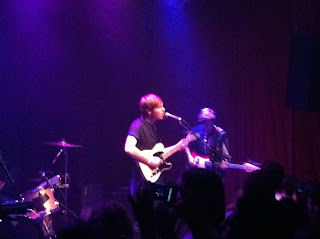 One of the most compelling sounds...whose 2010 album "Gemini" was absolutely superb, Wild Nothing's show at Popscene was eagerly anticipated, with the room being as crowded as I've ever seen it, as the line for the show stretched around the block.


We had heard that although the doors opened at 9, Abe Vigoda (whom we saw in 2009 at the Part Time Punks festival in LA) would be on at 10:30.  So we get there maybe a quarter before 10, and they hadn't even started letting people in yet, so there was a long line of people waiting to get in...took about 20-25 minutes to get in....inside is pretty packed, though it doesn't stop more people trying to make their way forward...typical stuff.
Looks like Nate, Vigoda's drummer, was also Wild Nothing's bassist, or they share the exact same taste in shirts(!)  Doing double duty on multiple instruments for two bands isn't something I'd seen before, though I did see Vivian Girls' drummer also pound the skins for Best Coast.   I liked Wild Nothing quite a bit...Tom thought they sounded like New Order...which I don't really hear except perhaps "Confirmation"...a standout for me was the title track "Gemini".
In the "too much information" category was told the band were delayed as they needed to use the bathroom.  Thanks, announcer! 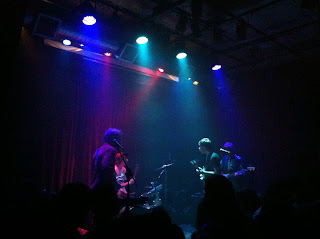 Parts of this recording, especially, during the first few tracks, are muffled, and I had to do quite a bit of bass reduction in post, but very listenable overall. 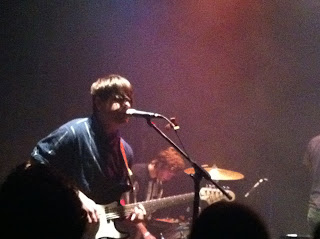 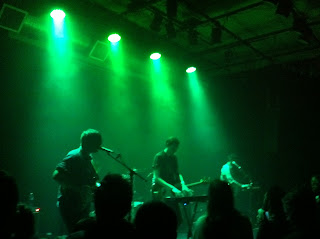