Three very very good but different bands that night, a bit of an unusual location typically features singer/songwriter types and not full band ensembles.  Interestingly, Wax Idols, whom I reckon is the best known of the three bands was booked as the middle act.  Rather than the four-piece we've seen them play as, this time it was only Hether Fortune backed by none other than Mat Hartman (of Henry's Dress/Coachwhips/Sic Alps fame)...more on their set in a bit. 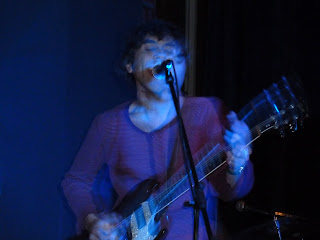 First up was the Aerosols, led by Joe Z Armin, pictured to the left in action.

I enjoyed their material, it had a bit of a Robyn Hitchcock feel with 60s-style Floyd organ played by Amy Fowler.  Overall, a good way to kick off the proceedings.


'untitled' is either called "Tropical Impact" or "The Harmony Band", though as of this writing it still has no official name.

Setlist, thanks to Joe Z for answering my request. 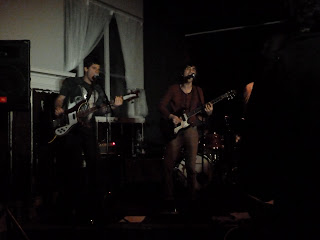 Cold Jewelry
You're On the Outside Looking In
China
untitled
Last Cup Of Tea
Zombie Crossing
Ain't It Hart [The Electric Prunes]
Fake Mirror
Satan's Sheet Music
If It Hurts, Take It Downtown 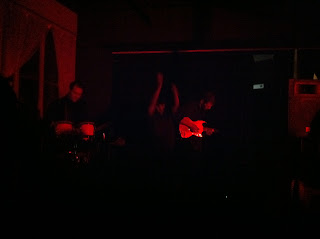 Playing last was Altars, whom are fairly new to the scene.  Lead by singer Melanie B, their sound was primary keyboard driven, but with bongos (played standing up!) adding a distinct flavor.  These guys remind me a bit of The Hundred In The Hands, but a bit more downbeat, and provided a healthy contrast to the feedback drone of Wax Idols, which had cleared out the room.  For me, their last song "Icarus" is their most solid effort, I'm looking forward to seeing how they progress over the coming months. 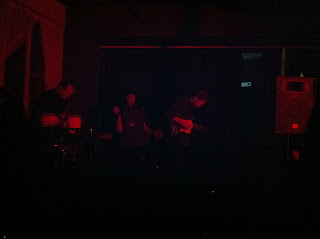 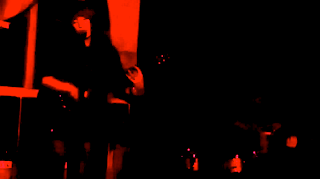 As you know, I'm a huge Wax Idols fan, go here to catch up on the other recordings I've done of them.    But I had no idea I was about to be thrown a curveball with delicious huge heapings of guitar drone starting in over the PA music, eventually leading to the chords of the brilliant Human Condition, quipping "I seem to have misplaced my band", followed a new composition called "Nothing At All", repeating the lyric "Time is no friend of mine", and then, after stating she only did this show to pay for her record, a heart-rending version of The Boys Next Door's "Shiver", which was arguably the highlight of the set.  After "All Too Human", Hether than pulls out a sheet of paper and proceeds to read from it in a piece titled "Yes, I Like Lydia Lunch"...reading out missives like "You should smile more, what's with your bad attitude?"..."I stab myself in the gut with a cigarette because I'm so punk rock"...after which Mat switches from guitar to drums for the last two numbers, a shambolic-as-the-original Buzzcocks cover and a great loose version of one of my favorite songs on the upcoming album, Gold Sneakers, which is introduced with "Here's an original, and I'm then I'm done torturing you", which Hether follows by mentioning that Mat had decided to play with her only yesterday because she didn't have a band in town, only to be "corrected" by someone in the crowd who mentions they've *at the show*.

The truth of the matter...is that it doesn't matter, Wax Idols would be Hether Fortune and whoever plays with her, whether it be Mat on drums (just for this show only, apparently) or as Mark E. Smith famously quipped, your granny (or maybe the guy in Altars) on bongos.

PA music > Human Condition
Nothing At All
Shivers [The Boys Next Door]
All Too Human
Tweets (Yes, I Like Lydia Lunch)
Ever Fallen In Love [Buzzcocks]
Gold Sneakers

I also videoed the entire set with my friend's Panasonic DMC-ZS7, which you can view here.

Posted by thehappyone at 2:47 AM