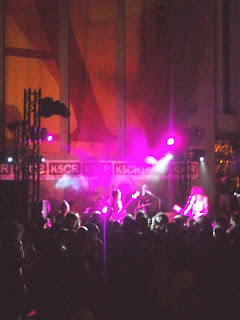 These guys opened for Thee Oh Sees in the last of our series of four SoCal recordings on offer...and have been growing on me steadily.  It's a bit jam band meets the Cure, but the psych-tinged guitar stylings of Guy Blakslee, unlike what those [expletive deleted] at Pitchfork would have you believe, is better than just a "middling" guitarist.
Entrance Band
2010-03-26
Founders' Park, USC
Los Angeles, CA
taper:  bcingyou (Sony ECM-990F > M-Audio Microtrack II)
setlist:  Silence On A Crowded Train / Still Be There / MLK / Lookout! / 'Prayer' / Grim Reaper Blues
Download (FLAC)