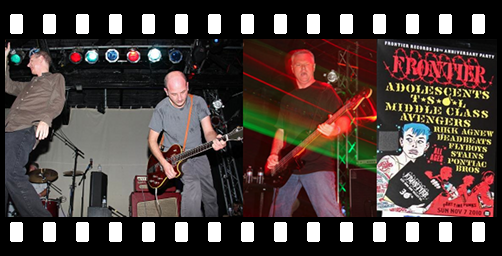 It is with heavy heart that I learned that guitarist Mike Atta passed away from kidney cancer on Sunday.

This post is dedicated to his memory and those who knew him or were touched by his music.

bcingyou put together the following as an introduction...

"We could split the night wide open, see all the secrets there"
- A Skeleton At The Feast by Middle Class from Homeland LP

My passion for music can be traced through the strain of logic that permeates the entire canon of Middle Class.  The searing insights from the monotone, unwavering delivery of Jeff Atta's vocals to the 'take notice' intensity of Mike Patton's bass lines and Mike Atta's guitar have picked at the scab of this music lover's soul for 30 years.  Never mind the distraction that they were most likely the first hardcore punk band (thanks in part to the wide-eyed consequence of copious amounts of Dr. Pepper), Middle Class spoke from the core of existence and demanded closer scrutiny.

A breakthrough song in the history of American punk is A Blueprint For Joy which decisively cuts through the raw inarticulate aggression of punk's first wave and opens the rusty gate of emotion revealing a darker side of life expressed in the notion that we are all ultimately trapped victims not just of a confusing society but of ourselves.

Middle Class possessed that rare quality of being able to tap the frustration that festers beneath the surface and the talent to execute.  The few times I saw them in '81-'82 left an indelible mark as from a group of young men who seriously considered their place in the world and reached beyond an audience for satisfaction. Always ahead of the pack.

The recent Frontier 30th Anniversary Party may have been to showcase the more well known factions of punk in The Adolescents, T.S.O.L. and Avengers but for the this heart of darkness I'll always identify with Middle Class as being the real deal.
Out of Vogue, indeed.

Live recordings after the jump... 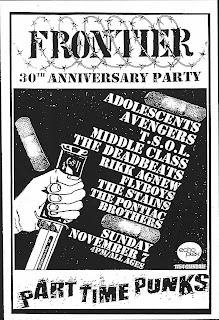 Situations
Insurgence
Out of Vogue
You Belong