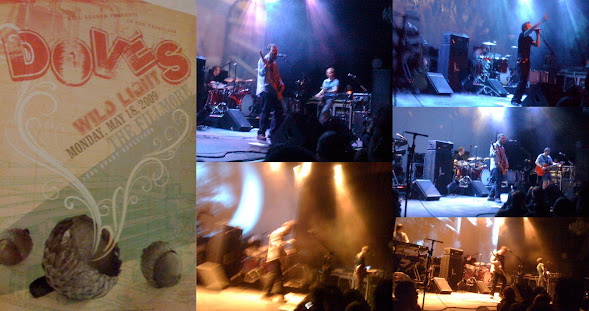 * = used iPhone, very poor quality, about 30 seconds is missing from this track

The Doves live at the Fillmore in "San Fran", as Jimi referred to it continually.

Unfortunately, this didn't come out as good as some of my other recent efforts, could be because Doves were LOUD, as this was one of the few recent shows I kept earplugs in, the other of course being MBV...or due to poor acoustics even though I was relatively close to the front stacks, was on the other side the last time...or perhaps I'm unfairly comparing this to the superior Seattle recording that cut_here did with his AT853's that was shared here on (a certain Bittorent live music sharing site)...

In any event, I reckoned I didn't have enough battery power to tape the opening act, as I ran off in a rush and forgot to take an extra set with me.  I was right, and I didn't have enough to capture all of the set either, as I ran out of juice a minute and a half into 'There Goes The Fear'...I had the wherewithal to then
use my iPhone to capture the rest of it in extremely poor, distorted quality.

There were a few other distractions, but it's otherwise still an OK listen.

Also note that I have switched to a generic filename format and am now properly utilizing FLAC tags.
(undone for this share)
Good review:

* Leveraging this recording for material gain will result in bad karma for thee!
* Redistribution in lossy format is OK, but retain this info file and reference back to this original seed, please
* Above all, enjoy!  Life is too short and brutish for anything else.

Recording sounds a bit thin, which is probably due to the sheer volume causing the Edirol limter to compress if I had to guess.  I could probably do some EQ tricks, but it becomes making a silk purse out of a sow's ear, so best just keep it as it is...I've certainly heard worse in my time....was a very good show, but probably one of the loudest five shows I've ever been to...

As stated above, openers Wild Light were not taped.

Here are some videos of this performance that I found...I played "Almost Forgot Myself" to my audio recording, was very enjoyable...

"Pounding" from none other than "Karen" (how mad):

Stunning footage of "Almost Forgot Myself" from 'bayareanorthernsoul':

Poorer quality "Black and White Town" from "gaae2000":
And finally, a quartet of videos from "AdmiralNeeda" who has captured quite a few shows over the years...

"Caught By The River"

"There Goes The Fear"