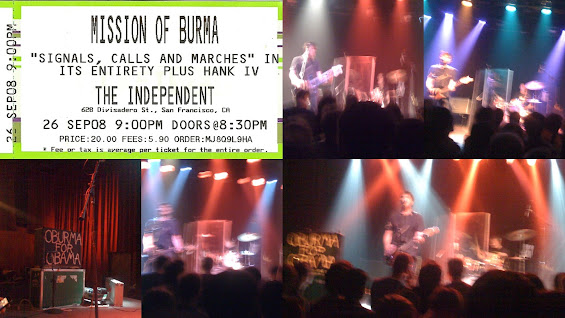 [P]  This cam a month before the 2008 election where the "hope and change" of one Barack Obama would just turn out to be politics as usual.  Let's just say the president after him would deliver anything but, and of this writing is still scheming to stay in power even after his successor has won both the popular vote and the Electoral College.

[1]  This was written in 2008.  Turns out that I would catch Hank IV in May 2011, opening for A-Frames, and liked them quite a bit more than what my compatriots would have suggested, though perhaps even then they're still a bit PBN (Punk By Numbers)

[2]  Not as bothered now about K.I.L.L. (Keep It LossLess).  In fact, I'd subsequently start upping my recordings to YouTube.

According to their Wikipedia, as of June 2020, the band is finished, so this is a good memento to document their live prowess.

I should add the following:

Copyright Disclaimer Under Section 107 of the Copyright Act 1976, allowance is made for "fair use" for purposes such as criticism, comment, news reporting, teaching, scholarship, and research. Fair use is a use permitted by copyright statute that might otherwise be infringing. Non-profit, educational or personal use tips the balance in favor of fair use.

Posted by thehappyone at 9:00 PM