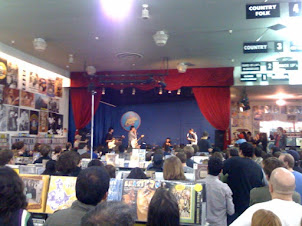 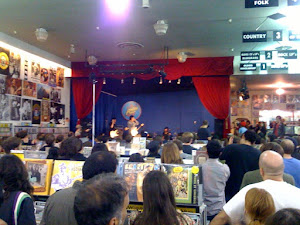 This is my master recording.

After the Flipper show a couple weeks back, it was time for another outing to the best record store in SF these days, which has also been a good place to catch free shows.  Hence, this recording, on the heels of their new album "Real Emotional Trash", featuring songs from that album, played in order (one was skipped to preserve the element of surprise in the set).

I had arrived just in the nick of time, and boosted the volume of first minute by +6dB since I was still making my way in.  You can see from the included photos about where I was in proximity to the stage, was about 20" behind the mixing board, which is where the boom mic in the photo is located.  Recording is very clear but not as 'hot' as the Flipper set, some compression can fix that, but by rule I do very little tinkering, leaving any possible remastering for others.

I didn't tracksplit the between-talk banter from Malkmus, which features various musings about his guitar, the now-defunct I-Beam club which was a couple of blocks away from where they played, LA vs SF (Dodgers vs. Giants, Germs vs. Dils, Plimsouls vs. Translator), and a bit about Geddy Lee from Rush being talented enough to play complicated bass parts AND sing.

Overall, an enjoyable set, and I'm not even a big Malkmus/Pavement fan!  Or wasn't...

* No leveraging this recording for material gain.  Buy the album!  I just did (on Itunes), as I'd be a hypocrite otherwise...

* Do not redistribute in lossy form, keep your MP3 or AAC's on your iPod, and not in the trading pool.
DOWNLOAD / STREAM
Unlike with Flipper, the full set from the Amoeba stream is online, and obviously being taken from the mixing desk is a better listen.  Older Amoeba sharings use Flash Video so are not long for this world but luckily, this one has been captured and transcoded by "ilovewaterslides" and preserved on Ye Olde Tube.
Oh, and that's Janet Weiss formerly of Sleater-Kinney on drums.  Didn't realize that at the time.

Posted by thehappyone at 6:00 PM